We often get asked about how we sharpen, how we test our sharpness, and why we choose a thin convex for the shape of the primary bevel. These are a few answers to the more technical questions. Some people (like us!) really enjoy the whole DIY concept and here is what we feel works best. We are happy to share what we know for the people who want to do it all for themselves.

These are the three questions we get asked on edge geometry:

They are all great questions.

What is edge geometry?

Edge geometry is the shape of the blade behind the very edge, and it affects everything.

In this example, the shaded blue area called the 'Primary Bevel' represents the Edge Geometry. It's the part of the blade that you grind or file to a specific shape. Each shape has it's advantages and disadvantages. 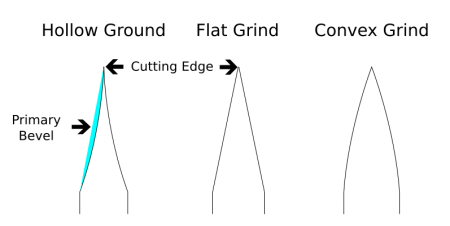 What Is Thin Edge Convex?

That's just a nickname we have given to our sharpening. Technically it's just a Convex Edge that is not thick.

Basically, the shape of the bevel (Bevel Geometry) is two gentle curves that meet at a point and the trailing edges (where the curves meet the body of the blade) are a subtle transition, not a harsh edge.

Why do you value Convex edge geometry over others?

Using a Convex edges on a machete is not our idea. At a guess it's probably the most widely used style of edge found on them world wide in countries that still rely on machetes as a primary agricultural tool. It's a do all edge that's easy to keep extremely sharp using simple tools.

Interestingly, you will rarely find a convex edge on big brand name machete here in the west. We suspect it's because jig sharpening Hollow and Flat ground edges is the fastest way to put some sort of an edge on a tool. It's relatively easy to set up in a factory and can be operated by anyone with minimal training.

Just a very brief note about two other types of edges commonly found, they work well but under different circumstances.

Hollow Ground edges are initially easy to keep sharp but there is not much steel behind the edge to keep it stable (think dents and chips). You will see Hollow Ground mostly on knives that cut and slice soft material such as straight razors, vegetables and meat knives etc. They are the most difficult to re-grind away from the factory without a complicated jig.

Flat Grind suits cutting harder materials and has the benefit of slightly more control during a cut. The flats on the blade can be used as a guide during carving work. Re-grinds are simpler but it's still challenging for most as a machete is much longer than a small knife.

Convex edges are hardwired to excel at heavy and deep chopping. They can be kept every bit as sharp as a Hollow or Flat grind. Free hand sharpening (no jigs) is easiest done on this style edge. The real advantage of a convex edge on a sharpened machete is that it can be very quickly changed in the field to slice soft material like a Hollow Grind and chop much better than a Flat Grind! If you tip up the convex edge with a file, it leaves a wire edge that slices soft material easily. If you use a sharpening stone, that edge will hold up to heavy abuse while chopping. With a little practice, this can be done very quickly.

The alternative is to keep your machete sharpened like a bushcraft knife and that edge will do it all!

So in summary, they all excel in some tasks but the most universal edge shape for a machete is the Convex Edge. 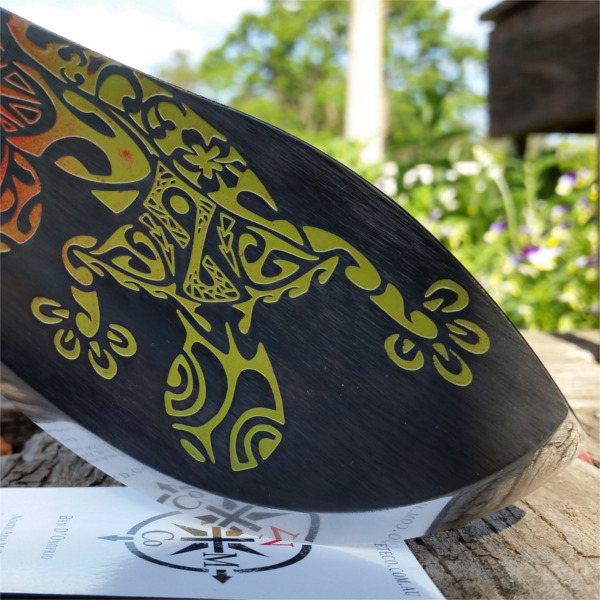 How Do We Shape & Sharpen At NAMCo.?

We have found a very slow speed slack belt grinder to be the best tool used to sharpen a factory new machete. We always use premium quality sharp belts at extremely slow speeds to ensure no damage to the quality of the steel! We have only one highly experienced sharpener that we use. There is no compromise when it comes to keeping a blade cool during sharpening! Rest assured you will get the best edge appropriate for machete use.

There are other methods that you can use to achieve the same results if you don't have a slack belt grinder and you want to start this process off from scratch. You can shape the convex into a new machete using hand files. There is a lot of steel you need to remove so it's a task best broken up into a few sessions (fatigue is dangerous!). Start with a good quality new file as they do wear out.

Traditionally, new machetes are taken to a town sharpener and heavy file work is saved for dent and chip removal by the user but it is still doable from the start by hand. Take care of your files while you work. they dull much faster when used incorrectly and cannot realistically be resharpened.

How Do We Test Our Sharpening?

We test our sharpening in two ways.

The first is easy for us. We live on a small organic farm...where the work is never ending!  Farm work is about vigilant maintenance. From experience,  you soon learn about 'efficiency in every way'. One of our solutions is to always have farm tools on us where ever we go. Generally, it's a sharp machete! It is a multipurpose tool that we use constantly. It's much easier to prevent an issue rather than to solve a problem. I would rather have a tool with me than walk back to the shed to pick something up.

So our sharpening and Tramontina's machetes get tested every day! We are also lucky to have a lot of regular volunteers work on our farm so we get to constantly teach machete skills and sharpening to beginners of all shapes and sizes.

This is how we came up with and test the 'Gaucho Grind', the 'El Premio' edge and the tip sharpening.

The second test we perform is on every El Premio sharpened machete that leaves our workshop. 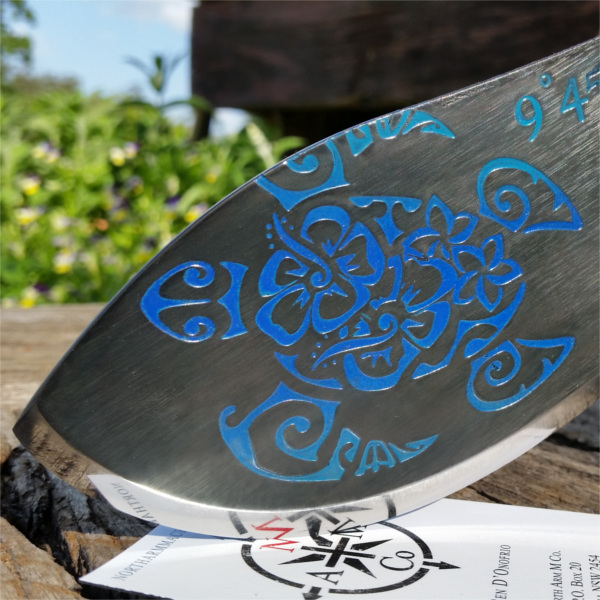 When you have a refined (El Premio) edge on a machete, it becomes a joy to use. You need much less speed and force to make the cut. The edge is refined in the same way you would find on a very sharp bushcraft knife, honed and stropped. We say it’s more suited to bushcraft users however, this is what we use daily when we work.
Once we have finished with the sharpening steps on each Premio edge, we then go back and forth honing , stropping and testing until we get a single edge that slices.

What tools Do I Need To Sharpen A Machete?

A note on sharpening equipment, You don’t need expensive tools to sharpen machetes. A $35 double sided traditional oil stone works perfectly well. Stick to the name brands ones such as Bear and Norton and you will do just fine.

Double sided axe stone are great but extra care needs to be taken as your hand is very close to the edge while sharpening.

A 'canoe' shaped stone is ideal as it is shaped more like a file so you can keep your hands a safer distance away from the edge and it's thin enough to contact curved edges well.

A file is also indispensable when you want to remove more steel faster or sharpen to keep a wire edge.

A better approach is to use both the file and stone when sharpening. They work hand in hand when maintaining and tuning your machete for work. 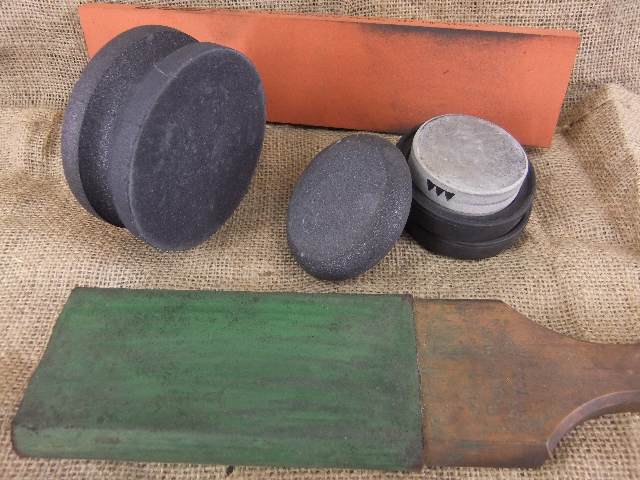 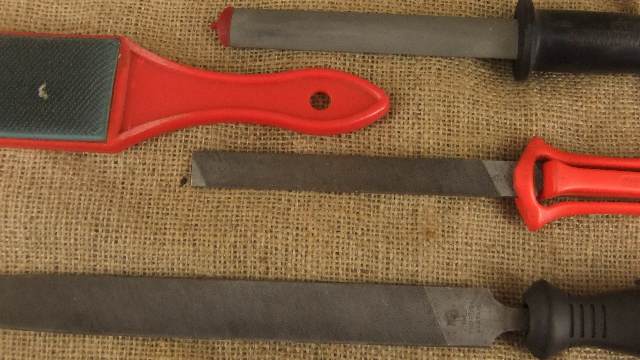 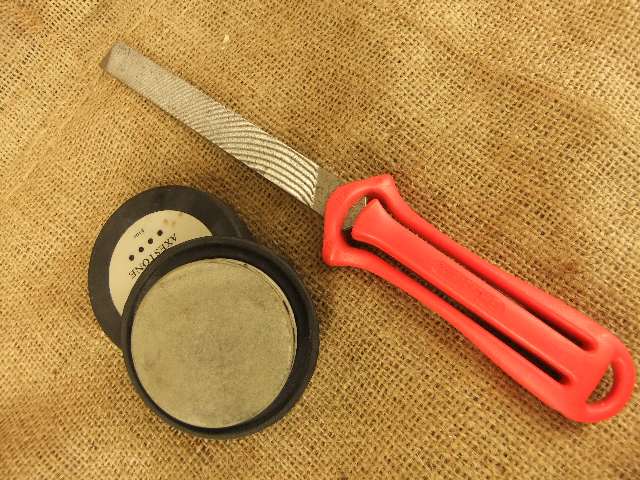 Machetes are lovely to use when they are extremely sharp (this is how you will receive it from us), however once the primary bevel has been properly set they perform remarkably well even over a range of sharpness levels. When the sharpness decreases between touching up the edge, it will still perform reasonably well in heavy chopping but you notice you need to swing the blade a lot faster when cutting thin unsupported items like grass. This is where safety comes in to it! Your responsible for assessing the situation and decide when, where and how you sharpen!